I get to hear the best stories…because of the people who come through the Strawbale Studio and networking!  I have wanted to share them for years….and am now taking the time to share some.  Enjoy the inspiration as much as I do !

Dave Stormsand, from the Detroit area writes about a natural building project that he is helping make a reality in Mexico: building a home with an indigenous family and reforesting in Oaxaca. FB page Soles De Piedra
Fundraising: A group of friends from Mexico and the US (myself included) are putting hundreds of hours of work into designing the house, organizing the volunteers  and where they will stay, fund raising, making sure we have the tools necessary, buying food  for the volunteers and the family and trying to make sure the project goes as smoothly as possible. The project begins the last week of January, will take about 8 weeks to complete, and will cost us $8000 US (materials, tools, food for volunteers, place for volunteers to stay, paying the father and his eldest son and all are covered in this).  One sweetly generous soul has already offered to match dollar for dollar whatever we raise!
Sooo, we need your help raising just $4000.   (www.7fires.org) is a way to donate and all money goes to the project through our non-profit !

-GIRLS YOUTH CORPS WINS NATIONAL AWARD
An award was received by SEEDS (ecoseeds.org, Strawbale Studio’s Fiduciary Sponsor) for a  project entitled “G.U.R.L.S.! Corps—Girls United for Resilience, Leadership, and Service. “ This program was created through a partnership with Child and Family Services of Northwest Michigan to provide opportunities for teenagers aging out of the foster care system, and was supported by the Biederman Foundation. The SEEDS Youth Corps hosted 11 students in the foster care system, five of whom formed this all-girls team.   The Corps Network, an association of more than 125 Conservation Corps from around the country just announced their 2015 Project of the Year Awards and SEEDS is one of the three Corps to receive this national recognition !

12/17/2014 The NEW PARADIGM – a small permaculture farm. This is what I am hearing over and over again.  For example ~ A fellow asked to be on the Strawbale Studio listserve, and since he is from Ontario I also recommended him to the Endeavour Center, a natural building & sustainable skills program initiated by Chris Magwood.   Bob responded: “Yes I know Chris, he is 2 hrs away and I know him well. He has been at our house and we have done various workshops with him.
Currently I am converting 3 acres into a food forest on swales and berms using Permaculture Design as guiding principles and ethics. “      James Robert Chambers Dip. Ed.  OCT, PDC.  Ontario

12/16/2014 Permaculture Class for educators in Ann Arbor.  A Permaculture Design Certificate (PDC) for only $500.Permaculture design is decision making, critical thinking, and problem solving protocols based on the patterns expressed in nature. It joins high science and appropriate technology to meet local needs in all aspects of society from economy to waste management, food and water security to city planning and education.  Jesse Tack and C. Milton Dixon, instructors.
–

12/16/2014 Voices for Earth Justice an organization from the Detroit area, is hosting an Interfaith Peace Prayer gathering for the Holi-days.  I was inspired by the video of their activities in the Detroit !
–
–

ECONOMY – supporting each other in the community.  I want to start a link that has the folks I know and love in the area, and their work.  Here is one:  Dr. Troy Farwell – who does Health Consulting and Education at his awesome store, Simple Organics Oxford, MI.  He also offers training to be a Holistic Health Practitioner with OM Wellness Institute.

12/14/2014  MAKERSPACES   Miriam Markus first told me about Makerspaces ~  where people can come together and share tools and information.  Over the past year or so I heard her be excited about the idea, then actually start a Makerspace in her art studio in Lum, MI.  She offered a class on Collage Art…and reports ….

“It was a good time. People all 6, including me, were pleased with the space and the doings. the wood stove got it cozy..  There was lots of food and a friendly atmosphere. Next up felting at Deb Stallings on Jan 19. 6pm. She’s in Imlay City and has offered her space. Got bags of alpaca from a farm in Columbiaville. Gorgeous stuff. “
Mir

11/14/2015  MICHIGAN FOLK SCHOOL.  I had a conversation with Jason Gold. He and his wife Julie coordinate programs  at Washtenaw Community College as well as their farm site near Ann Arbor.  Lacto-Fermenting, Snow shoeing, Fiddling, …. on and on. He is collaborating with many, include Nate Ayers, who teaches and does Permaculture. I have been asked to teach some basic 1 day natural building courses there, and a week-long Intensive here at Strawbale Studio. Looking forward to that !                                      www.mifolkschool.com/   The mission of the Michigan Folk School is to build community by providing educational programs that promote learning, teaching, and renewal of traditional folk skills …

11/13/2014  OAKLAND COUNTY PERMACULTURE MEETUP meets monthly to share skills, a potluck, and network together. Skills have including pruning apple trees, tours of local farms, canning, soil blocks and more. This month the featured a skill-share on making Cyder, a traditional U.S. brew, traditional in Europe and the Europeans that colonized this continent.  Vinegar can also be a product of this process, using local apples and simple processes and materials.  Fun.

11/11/2014  WATER HEATED FROM WOODSTOVE. Volunteers and Trainers from the Church of the Later Day Saints came to help and tour.  It turns out that the trainer, about 65 years old, had built and lived with a hot water system that he designed and built, that ran steel pipes through their woodstove, and thermosyphoned, without electricity or a pump, into an overhead storage tank.  Pretty cool, er, HOT, that is !

August through October, 2014.  I was hearing great stories but not recording them !  Yeow.

7/16/2014  Bob, who delivered some local “sharp sand” for the Sauna Addition 2 week building workshop…told about how they were raised in the Upper Penninsula of Michigan, and bathed in the lake, then set up a pipe with a hand pump on it, to take the water up into a holding tank so it could gravity feed into their house.  His grandfather was from Finland where they had awesome saunas, too. 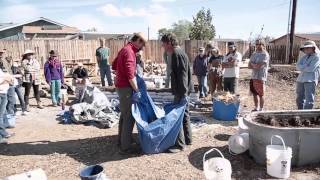 The One Day Cob House

7/2/2014
THE ONE DAY COB HOUSE     Preview YouTube video One Day Cob House, Reno, NV
I received this email from a building buddy, Kyle Chandler-Isacksen ….who writes
“Hi, everyone.  Here’s a link to a great 10-minute video about our last wonderful natural building workshop.  It really captures the spirit and joy from the three-day gathering.”
The Director of House Alive, Conraad, was the host at Camp Latgawa in Oregon where many Natural Building Colloqiums were held that I attended.  Conraad, moved by the gatherings, ended up becoming a natural building teacher.  This is a beautiful short video, narrated by Kyle and Conraad.
–
–

Germany seeks to have 45% of their Energy produced by renewables by2030.

RENEWABLE ENERGY in Germany has increased from 6.3 percent of the national total in 2000 to about 25 percent in the first half of 2012.  Learn about their strategies and goals on this wikipedia article.  I have been part of a study group that read Jeremy Rivkin’s latest book “The Third Industrial Revolution” in which he proposes a distributive renewable energy system.  He has been advising the Chancellor of Germany (a woman) and has contributed to this hopeful evolution toward sources of energy that are endless.  Ah.

Thatched ROUND HOUSE in Wales

6-14/2014  Jo, from England, visited this weekend.  I  met her at the Cob Cottage Company where she was coordinating the internship natural building program there.  Over the last 7 years she has been teaching natural building and contributing in many ways to the movement. She is now on a Permaculture Tour of the U.S. with a friend, to get ideas that they will take back to England with the goal of integrating the best of them into projects there. Jo told me about a friend of hers in Wales who is making a thatched Roundhouse of Phragmite Reed Grass, like the Strawbale Studio.  Check out the design and shape of this ancient traditional building style !  The woman who built it lives off the grid and walkes up the hill to use the phone.  I can write her, Jo says.

ound: I did a thatching workshop on the Cordwood Chapel at Kristine Beck’s family farm  which is evolving into an awesome Permaculture Center (Kinstone Circle Academy for Applied Permaculture)  In addition to organizing Permaculture & Reskilling workshops for adults and youth, she is creating a Food Truck.  (Deanne)

Kristina writes:
The thatching with William went fantastically well!  (He finished the thatched roof of the Cordwood Chapel) You will just have to come see it sometime. The Chapel is beyond magical.  I am not slowing down at all – I just finalized a deal on a Food Truck and will soon launch the mobile Kinstone Kitchen where we will offer local, organic when possible, and farm to table food. I don’t have a full plan for this yet – but am working on it. My sister will cook and manage it – she is fabulous.
COSTA RICA PERMACULTURE – connecting to U. S. and Canada.

6/13/2014
Ian Hoggarth from Sarnia attended the Earth Plaster & Sculpting workshop at the Strawgbale Studio this weekend.  He has been learning about permaculture and natural building and is excited to know that  they are what he wants to do in life !  Ian has attended several workshops here, including Introduction to Thatching. This weekend he came with friend Kyle, and they camped and did outdoor cooking on the land while attending the plastering workshop.

Ian is thrilled to be traveling to Costa Rica for a month this winter to join his cousin Keith Deitrich, who is doing is creating a permaculture center there!   Check out this website
Keith, it turns out knows a few people I also know from natural building, such as Chris Magwood who co-directs the Endevour Center for natural building in Ontario, Canada.  Keith is also hoping to collaborate in some way with Fox Maple School in Vermont.  Ian is really looking forward to this experience of participating in the things that are going on in Costa Rica.
Login to Strawbale Studio
Reset Password
Enter the username or e-mail you used in your profile. A password reset link will be sent to you by email.
Already have an account? Login