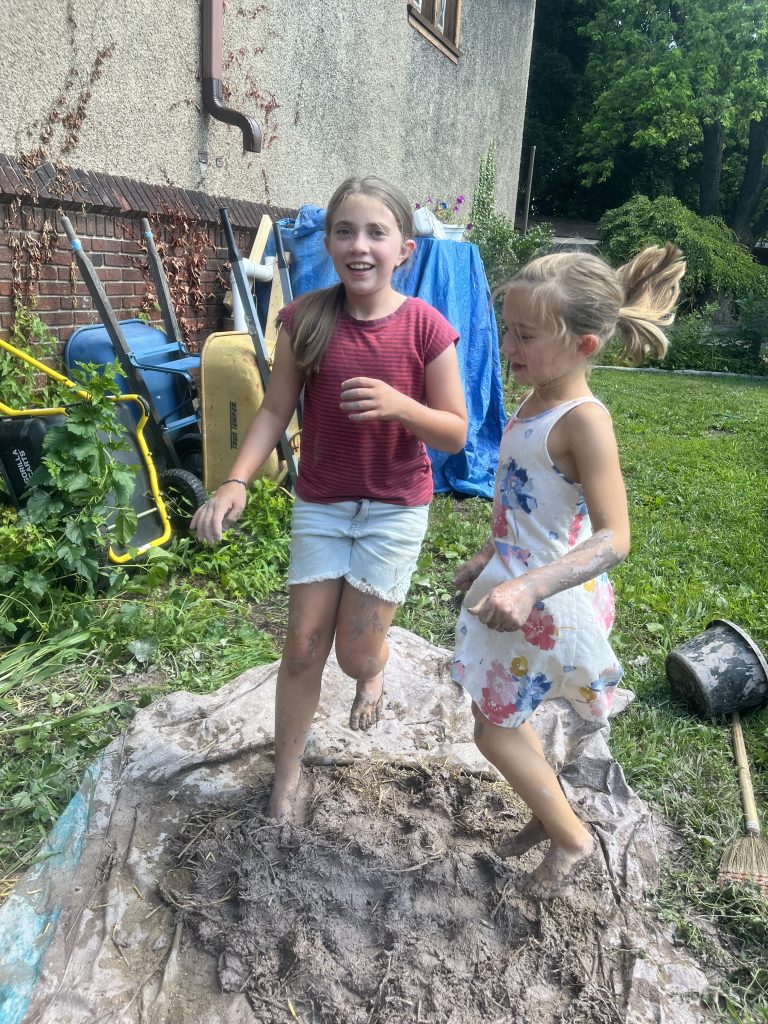 The Detroit Waldorf Cob Bench was our destination…. to complete the base shape of an Earthen “Cob” Bench on the school grounds.

It was a very satisfying day, to be in a lovely setting at the Detroit Waldorf School, to use simple natural materials – clay and sand, some of which was from the land at Strawbale Studio …. and to co-create something useful and beautiful with others ! Detroit Waldorf Teacher Justin Trombly initiated the bench building project several years ago after his class came for a Field trip to the Strawbale Studio.  While here, the students learned to make “Cob”, a sand-clay  mix, and shaped small cob models to take home. A Cob Mix can be sculpted into  many shapes, such as a bench. am earth oven and even wall systems.  It hardens like “adobe”, and can be protected with linseed oil.

While at Strawbale Studio, the class also harvested field stones from the rock piles (brought here by the glaciers, and collected by the early settlers into piles so they could farm this area). The class loaded the rocks into a truck that took the stones back to their school to become the foundation for their Cob Bench.  Justin and his father harvested wood tree trunks from the Strawbale Studio land and transported them back to the Waldorf School by truck — to become the posts for a frame shelter he built to protect the bench.

So here were were, continuing on this project –– mixing ‘Cob” , building up the shape of the bench, and starting to add a bird sculpture with clay & sand,! Some of which earth was harvested from the ground at Strawbale Studio.

Two Assistants joined Deanne & Justin in the morning:  Cooper Green (who is currently residing at the Strawbale Studio land.to make a documentary video of it’s history and natural building strategies) and Sienna Walasak (who is putting together an integrated sustainable skill set). They mixed batches of cob, taught some of the school children, and helped apply the earthen plaster to the bench. In the afternoon a few summer camp youth joined in as we continued to transform the the bench to an almost finished shape.

When the shaping is done, we will apply a “finish plaster” made of earth.  When the plaster dries, coats of linseed oil will be applied as a natural waterproof sealer.