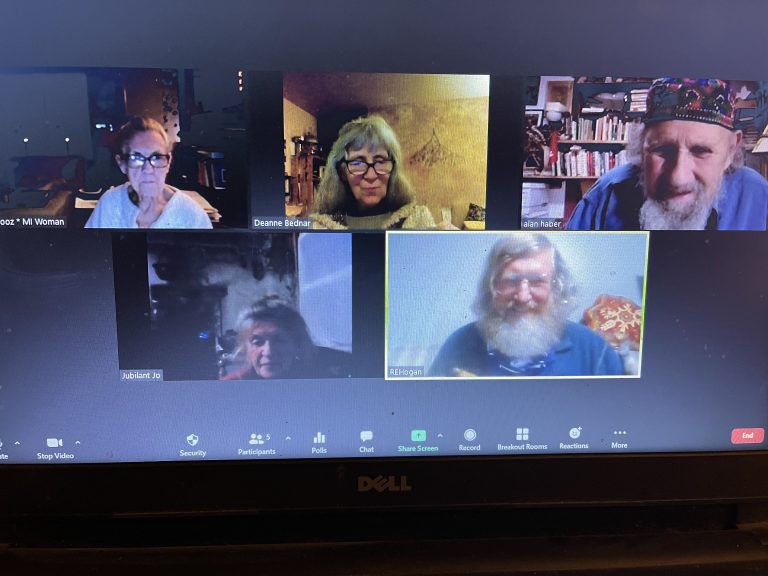 What a rich time being together over this Solstice time! Strawbale Studio Friends from Michigan, Ohio, New York, shared Resource links, Inspirations, “What’s Alive In Me”, and Strawbale Design planning for a small structure.

Costa Rica. theme
RE Hogan mentioned that his son was home from Costa Rica, and 2 others in the zoom had stories to tell about their time in Costa Rica, too. An Ecovillage, modeling bio-mass energy, solar, permaculture. that Alan visited..and an Ecological Conference Sooz attended, RE remember his visit to the Monteverde Community – Costa Rica

Cat theme
As our various cats wander on to our laps and into the zoom.  LOL

Round Tuit theme.
A joke: Alan tells of his next iproject, to fabricate a “Round Tuit”…..
Because everyone needs to get a Round Tuit!  And Jo holds up a round circle like a coaster, with the word TUIT on it.  More LOL.

The Right of Return theme.
Mother Earth Delegation.of United Original Nations was mentioned, by RE,  then Alan added The Israel, the Right of Return. And an “Invitation of a Return” is planned to the Potowanami to re-settle in this area..Mentioned also was the The Land Return movement globally.

RESOURCE LINKS from the chat: Human Energy video series​ on the Noosphere  More are listed at the bottom.

RE      It is absolutely astounding to experience the creativity of how people of all ages are connecting together. Create beauty and repeat.

Anise    Inspiring me recently and for a while is “increased awareness of everything”. Aware of a lot of things I really want to do.since I’ve started meditating. Morning pages: writing 3 stream of consciousness pages each morning.  I;ve learned so much from that !

Jo:       My inspiration is seeing the moon this week as it got full, and receiving emails from a prisoner…through the Alternatives to Violence Project..who has gotten out of prison & has had a hopeful interview for a job. “WHAT’S ALIVE IN ME”  a sharing go-around

Anise from Ohio shares “what’s alive” in her::
I am so Happy my new compost bin is working, and even smells good!
I met a troop of boy scouts building a board walk bridge in a local nature preserve. Nature preserve director was able to connect me with a volunteer group where I can learn carpentry skills! Yay!
Doing a daily 40 min meditation with my friend has made so much difference in my life! I am able to be so much more in touch with what is really important to me and take steps toward that.
And I am having the best chats with random people!

Jo  from upstate New York shares, she’s wanting to take a nap, and having trouble with the time change! Not in sync with clock time yet. She found Reveal Films pandemic videos to meet her need for clarity:, interviewed, researched scientists and doctors, to be replayed this weekend.
Her new Amish 10’x14’cabin came last week, but because of the mud it wasn’t able to be placed on the stone pad yet.

“The 18’X20’ lean-to shed builders were skillful, and I could help along the way. I moved the chickens out of the barn…and took them to their new lean-to Shed. One red hen who didn’t make it to the new shed was waiting outside the next moring ! .
My daughter…was helping me today, so Christmas morning we can zoom together

RE from Ohio shares… this has been a time to celebrate with family being around and I”m in close touch with my brother who is very ill.

I’m involved with projects that are connecting networks and movements, and bringing synergy across continents and communities:

Inspiration comes from The Center for the Story of the Universe  / The Human Energy Project with Briane Swimme as narrator. Worked closly with Thomas Berry. There are 6 min. short videos about the  “Noosphere…a philosophica third layer in a succession of phases of development of the Earth, after the geosphere (inanimate matter) and the biosphere (biological life). Just as the emergence of life fundamentally transformed the geosphere, the emergence of human cognition fundamentally transforms the biosphere. Global heart brain mind union of spirits and energies finding each other being facilitated by the Humanities project to facilitate….”

Center for Sacred Studies. The Fountain, is on the website Mother Earth Delegation.of United Original Nations

Sooz from Southfield shares- This year I survived cancer, and am doing well.  My energy is coming back, and I will likely be able to garden again next year, do fermenting. I am Grateful. I have also found people who’s views I share around covid and vaccination.

Alan from Ann Arbor shares “what’s alive” in him:  A little blue spruce tree. To be planted in the Ann Arbor Commons, his co-creative passion, until it needs to be moved. Last year holiday tree was relocated to a local golf course. Tree symbol. Tree of Life. Alan shares thoughts about Covid.

Alan is imagining a Strawbale Structure being collaboratively built in the Ann Arbor Commons. Alan shares about the values and history around that project.  A visiting friend, Architect teacher at VT waldorf schools said “ITS ALL COMING TOGETHER. All are COMING TO SEE THE INTEGRATED PICTURE !”

Deanne from Oxford shares classes are starting up, and I am also doing a lot of going through things in the house, that are of value….consolidating, clarifying, simplifying and seeking to still keep the essence of “why I was saving and valuing these things”.  I am looking forward to a small Solstice Gathering, where we will explore cosmic time and events.

STRAWBALE DESIGN was the main project focus of the evening. The last 30 minutes of the zoom was devoted to giving our best ideas to Alan who hopes to have a collaboratively built natural structure at the Ann Arbor Commons in the future.

As ever, a rich weaving this evening. Gratitude.
Deanne

From  Jubilant Jo A Health Perspective

From Deanne re Strawbale Folks in Ann Arbor