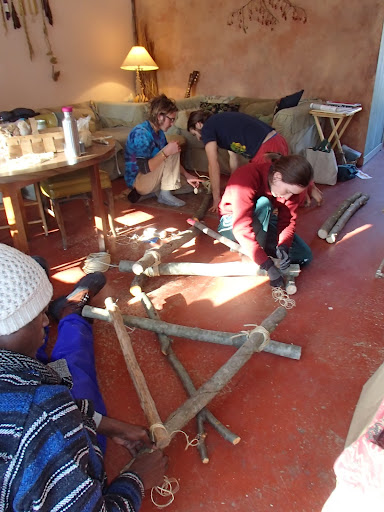 On Mon the 13th, our Winterns Kirsten, Scott, Ben, Zack and Jimez started making a model of the Round Pole structure for the upcoming workshop, which was moved from the 11th to Sun the 19th, due to the extreme snowfall.  Deanne also gave them an official orientation to the 2014 Winternship, discussing the month’s learning plans and goals.

On Tuesday the 14th, the main goal was to start building the thatching frame using round pole and lashing techniques, which Winterns began to learn the week before. This would be used in the Thatching Workshop set for the upcoming week, to have near the earth oven pit as a model during the workshop. Winterns also took care of a few chores like gathering sawdust from piles out by the pipeline corridor to put into the compost configuration inside the house. In the evening, they went together to yoga class at Ramsa Yoga, where Deanne is a regular, to decompress.

Wed the 15th, Winterns completed the thatching frame from yesterday, ordered some bulk food for the SBS, did more debarking using draw knives, and completed the round pole saw horse. That evening the SBS held its monthly Full Moon Potluck, including a tour of the SBS, red shed, and earth oven. On this, one of the Winterns proclaimed, “It was cold and dark and nice.”

Thurs the 16th was another precious day off. A few people from Frogholler Farm, where Kirsten normally works, had stayed the night from the Full Moon Potluck. Everyone enjoyed a pancake breakfast with applesauce from apples at the farm. 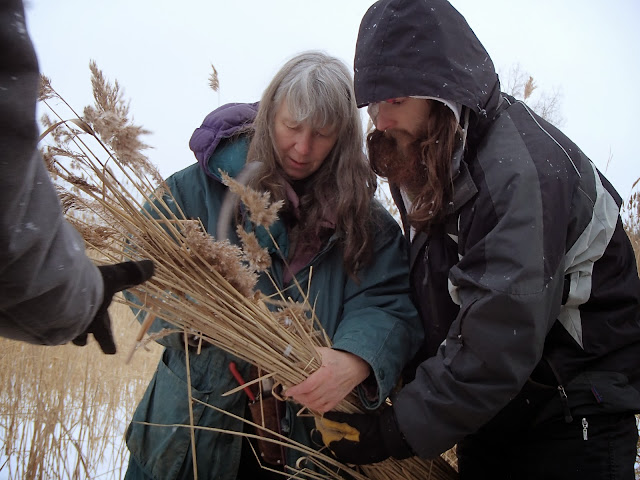 Finally, on Fri the 17th, Winterns prepared for the weekend workshops, Thatching on Sat and Round Pole rescheduled for Sun. As a group, they went out to the local reed fields for the first time and learned how to harvest the phragmite and tie up bundles that will later become a thatched roof. After strapping the bundles on the roof of the car, they returned with a job well done.