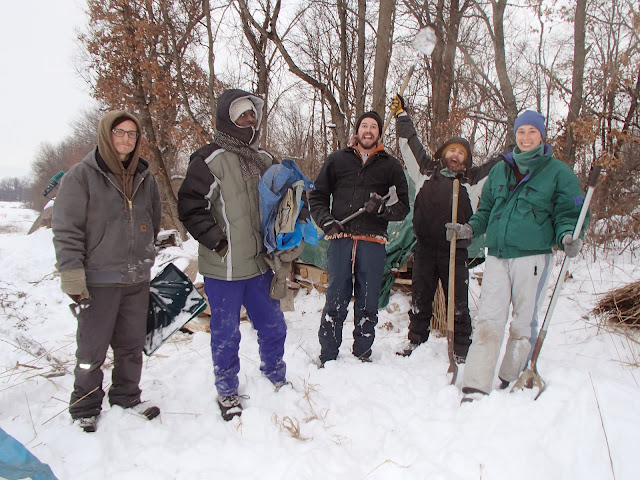 The Winternship (Winter Internship) is a program which runs from Jan 5 through Feb 5, 2014.  Participants learn a wide variety of skills in natural building & sustainable living and attend all workshops during the month: Round Pole, Rocket Stove, Thatching intro, Earth Plastering & Sculpting.

This year’s Winternship had a slightly delayed beginning due to the extreme weather this January. Kirsten, Scott, Ben, Zack, and Jimez were all scheduled to arrive on Jan 5th but since southeast Michigan received up to 18 inches of snow (WOW!!!) that weekend, people did their best to trickle in throughout the week. Jimez and Kirsten managed to arrive on Sunday, while Zack…got stuck in the Cleveland bus station for 3 days !  Some of the initial activities they started were snedding (go on, look it up) and debarking logs for upcoming workshops in the month. They also decided they wanted to make some saw horses and researched designs online, and tried to integrate some Round Pole principles. While harvesting trees for saw horse, Winterns also came upon mushroom logs under the snow and soaked a few indoors in the bathtub in order to grow mushroom. (Today, Jan 28th we ate the ones who grew)

On Wed Jan 8th, Winterns were able to have some fun socializing outside of the SBS by attending the Oakland County Permaculture Meetup’s monthly meeting in Clarkston, MI. The theme of the Meetup for that evening was how to set up food pantries and buy in bulk collectively with friends and neighbors. Winterns enjoyed the knowledge sharing and networking with Meetup members of similar interests. 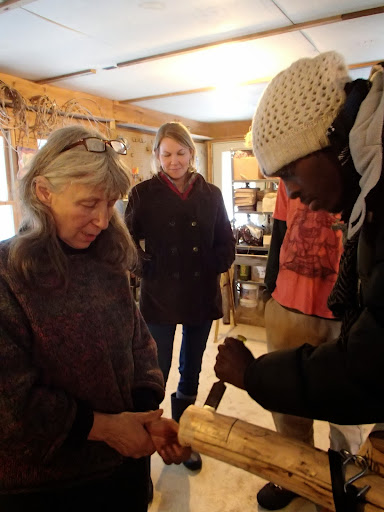 On Fri the 10th, everyone started getting ready for the Round Pole Framing workshop scheduled for the weekend. This included firing up the rocket stove in order to warm the space. Unfortunately, on Sat the roads were terribly icy, and very unsafe. Deanne’s co-instructor, Mark, tried to come out and had to back home. Deanne and the Winterns tried to get the message out to everyone but a few people missed it and managed to arrive unharmed. Two of these people were Jason and Julie Gold from the Michigan Folk school near Ann Arbor. For their trouble, everyone put together a smaller version of the Round Pole Framing, which was very much enjoyed.

Sunday the 12th, the Winterns had a day off. Yay! A woman named Krystal and her 6 year old daughter Phoenix, who had been visiting and helping since the end of the week made an awesome breakfast before leaving that morning. Everyone else spent the evening playing cards and enjoyed their day of rest.

Not even the Michigan weather can keep these Winterns down 🙂

Who are the Super Heroes ?